Dim Sum Factory got off to a rough start on Yelp. Currently as I write this they are sitting at around 2 stars. Ouch. Is it deserved? Since it’s run by the same people as Top Gun, which generally has good dim sum, we thought it would be worth a try.

First, they had a rough opening. I don’t know the whole back-story but we kept checking back to see when they would open, and it seemed like the sign kept changing, the date kept pushing out. Eventually, they seemed to have opened for a day or two, closed, and left just the bakery open. In those first few days, Yelper’s slammed them pretty hard. Once you’re in that hole in Yelp, it’s really hard to dig out of.

The grand opening sign is out though, and they are clearly in business for real this time. The décor is a mix of modern and traditional that works well. It’s a very open setting, which should lend itself to the noisy bustling environment that is dim sum. The restaurant takes an odd twist though, in that it tries to turn dim sum dishes into dinner portions, and everything is by order only, in dinner size portions. There are no dim sum carts rolling around the place, which takes something away from the atmosphere. Even an occasional cart with some desserts would help make it feel more authentic.

So, let’s talk about the portions more. The average dish here is approximately twice the size of a dim sum order. Iris and I can usually get through 6-7 dim sum dishes, and here 3 was plenty. Siu mai usually comes about 4 to a steamer dish. Here there are 8 in an oder. Chives & shrimp dumpling: 3 at any normal dim sum place, 5 here. Accordingly, the prices are about double per dish as well. The menu had a nice selection of classics, but felt a bit uninspired. All of the offerings were pretty safe, traditional dim sum dishes as far as we could tell. There were a decent number of options, but a number of our favorites were nowhere to be found.

We ended up ordering 2 dim sum classics and one non-dim sum dish: 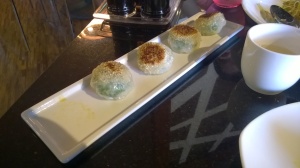 Beef in rice wrapping, chives and shrimp dumplings, and Singapore-style friend noodles. One dumpling is missing in the pictures above. I couldn’t help myself. 🙂

Each of the dishes was good, brought out hot and really did meet my expectations for dim sum. They were all well executed. Top Gun has some of my favorite Singapore fried noodles, and they clearly carried the recipe over from across the street when they opened this place up. Tea for two, 3 dishes, tax and tip ran a bit under $40, which seems about right for a nicer dinner, though a bit on the higher side for dim sum for two. At Jade Garden, we’d typically clock in at around $30, and the food is just as good even if the atmosphere is downright chaotic.

Service was good, if a bit disorganized. After being seated, we were asked for our drink order from two people within two minutes. The servers were attentive, cleared plates quickly and were polite. One impressive touch: they kept the teapot full, we never had to tip the lid up. The one blemish came as a bit of a surprise at the end. Iris left her sunglasses on the table, and she went back in to pick them up. She asked the lady at the door if they had found her sunglasses. We think the lady was either the manager or owner, we recognized her from Top Gun, and she was dressed in a suit, a bit nicer than the wait staff. She abruptly pulled the sunglasses out without saying a word, no pleasantries or politeness whatsoever. But for that, we had a good experience.

A few days before this, we tried the bakery. We ordered three two buns and a chocolate walnut cake. The walnut cake was light, the chocolate coating reasonable, but the flavor was a bit lackluster. And it’s not just my American sweet tooth that was disappointed. Iris agreed that it was a bit weak as well. The other pastries were tasty, but not amazing. There aren’t too many options that I would put above them on the east side though. Pickings are slim over here. Kiki’s is probably our favorite among the Asian bakeries, still.

The bottom line is this: They have some rough edges to work through, but Yelpers are being overly hard on Dim Sum factory. They beat up Din Tai Fung when they first opened too, and that turned out pretty well in the end. Hopefully with a little adjustment on the part of Dim Sum Factory, they can climb back up. They have decent food, and I can see ourselves going back there. It’ll work better with more than just the two of us, so next time we’ll be looking for friends to join us. The food is good, just make sure you go in prepared with enough friends and with the right mindset. The dishes may be dim sum food, but it’s not the quite the same dim sum experience.