… ’cause you can never have too many.

I just wanted to give a quick plug for a macaron class that we took at PCC with Laurie Pfalzer. The class was fun, Laurie clearly knows her stuff, and her experience comes through. Aside from that, the class is great because you leave with a box full of cookies of various flavors. 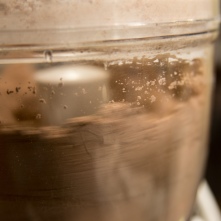 The thing that I most appreciated about the class was trying a new recipe that was a bit different from others that we’ve used, and getting to see how that affects the outcome. The recipe that I normally use is a pain, but we like the results. We make a merengue and later fold in a portion of un-whipped egg whites. In Laurie’s recipe, we just used whipped egg whites, and did not add syrup in the mix. That simplified things a lot, but the centers were a bit less chewy after baking. So now at least I appreciate why we do it the hard way, and what it buys us.

We also got a chance to work with a buttercream frosting. Although she made it, I appreciated getting see the process and have her talk through it. That’s something we haven’t done yet (instead, we use Fran’s chocolate sauce).

And just to be clear, even the simpler recipe from the class was delicious.

This series of classes is just about wrapped up, but keep an eye out: she’ll likely run this class again before too long. This is a perennial favorite.